Elucidating the Identity of Dark Matter

The identity of dark matter and proof of its existence

Physics Original Theory Research Series 1  2020/12/26 S.Asada Corrections and additions are made at any time   →Japanese edition日本語版

←   Returns to the top page

It is an observational fact that dark matter, an unknown substance that is not observed but has the effect of creating a gravitational field, exists in large quantities in this universe, and that the total amount of it exceeds the total amount of visible stars and galaxies. In this paper, we will elucidate the identity of this dark matter with our own theory, and clarify how it is made and what kind of properties it has.

0. Conclusion
0-1. What creates a gravitational field is matter itself, not "mass or energy"
For the proof of this, see "2. Proof of existence of vanishing mass". It may be slightly different from the Einstein equation, but according to this theory, inertial mass and energy do not have the ability to create a gravitational field (distortion of spacetime). We usually call the property of receiving acceleration or generating inertial force in the gravitational field "inertial mass = gravitational mass" or simply "mass". Furthermore, mass and energy are equivalent in this property (E=Mc^2). In other words, energy has the properties of inertial mass and gravitational mass.
In the conventional standard theory, the gravitational field is a distortion of space-time, and its magnitude is "described by the energy and momentum tensors". Roughly speaking, this means that it is mainly mass energy that creates the gravitational field. In other words, it is the claim that "mass creates a gravitational field and is further accelerated by the gravitational field."
However, according to this theory, the cause of creating a gravitational field is due to another kind of ability that matter itself has, and inertial mass and energy do not have such ability. The property of inertial mass is usually associated with matter, but inertial mass can increase, decrease, or even disappear altogether. Even in such cases, the ability of matter to create a gravitational field remains constant and does not change.
0-2. Phenomenon where matter loses mass
As a phenomenon that is widely recognized as a general theorem (the law of conservation of mass and energy), when substances are bound by gravity or electric force, they always release binding energy. Then, the mass conversion value (ΔM=Ef/c^2) of the binding energy released from the substance decreases.
And as the bond energy becomes larger and larger, a larger bond energy is released accordingly. Then, it would be reasonable to think that the mass of matter may eventually become zero.
0-3. Matter exists even if it loses mass, and the gravitational field it creates does not change
Matter will continue to exist even if the bond energy is released to the limit and the volume and mass become zero. Mass is one of the properties of matter, but there are also states where this becomes zero. Just because mass is zero doesn't mean matter is gone. And the matter continues to retain the ability to create a gravitational field. In the pair annihilation described above, an electron-positron combination with no volume or mass is generated, but the gravitational field created by these does not change before and after the combination.
Gravitational bonding and electrical bonding can certainly occur with bonding energies so huge that the mass becomes zero. Matter that has lost its mass in this way disappears, leaving only the property of creating a gravitational field, and becomes almost unobservable. My argument in this paper is that this is the identity of dark matter.
0-4. Properties and types of dark matter
Specific dark matter candidates include electron-positron conjugates and proton-antiproton conjugates. These have zero volume and mass in three-dimensional space, as explained in detail in "Proposal of Four-Dimensional Volume Conservation Law". For the proof of this, see "2. Proof of existence of vanishing mass".
Since they have no inertial mass, they probably move at the speed of light, and since they have zero volume in three-dimensional space, they usually interact with matter, pass through without colliding, and continue moving at the speed of light. The probability of existence will be widely spread. However, it has the ability to create a gravitational field as an invariant. In other words, it continues to maintain the gravitational field it had before the mass disappearance occurred.
Such microscopic dark matter is so small that individual gravitational fields cannot be observed. However, since there are so many of them, at the cosmic level, they have a great influence on the movement of galaxies and even the formation of the universe.
The above is mass loss due to coupling by electric force, but mass loss due to gravitational coupling between stars is also possible. However, in reality, the masses of two stars are never completely equal, so they will not be completely massless after merging. In addition, when two stars are gravitationally coupled, they become a black hole before they can fully release their binding energy. In that case, the binding energy is also confined in the black hole, so that no further binding energy can be released.
However, a black hole that has lost a large amount of mass due to such gravitational coupling has mass, but has a larger gravitational field than its mass. In other words, even though it has a small mass, it has a much larger gravitational field, so it may be treated as a kind of dark matter.
0-5. Generation and annihilation of electron-positron coupled dark matter
The figure below shows the formation of dark matter by the combination of electrons and positrons. They also show that dark matter can reseparate into electrons and positrons by absorbing high-energy photons. However, dark matter cannot absorb photon energy directly, and this reaction (pair production) occurs stochastically, for example, when it collides with another nucleus and enters a high-energy state.
The figure below shows the formation and disappearance of dark matter. When electrons and positrons combine with their strong electric force, they emit energy equal to their total mass in the form of photons, and themselves become vanishing masses (= dark matter) with zero mass. It has only the effect of creating a gravitational field and wanders through space. And when it absorbs a high-energy photon, it breaks the bond and splits again into an electron and a positron. Bonding is called "pair annihilation" and separation is called "pair creation".

0-6. Behavior of dark matter and its effect on galactic motion

When dark matter passes near or through the nuclei of ordinary matter, it is subject to some strong electric forces, temporarily loosening the bonds. If a high-energy photon acts at this moment, it may be absorbed and the bond may be broken to generate a pair. It will also change its course under the influence of electric forces, resulting in a zigzag motion.

In this way, dark matter is bound to the galaxy for a long period of time, and is distributed widely and in high concentration, especially in the outer part of the galaxy. And the gravitational field caused by these can explain the uniform rotation of the galaxy's outer periphery.

There are restrictions on how black holes can absorb normal matter, making it difficult for them to grow rapidly. A black hole will have a large absorption cross-section for dark matter due to its spatial structure. A black hole that absorbs a lot of dark matter should have a small inertial mass compared to its gravitational force.

The behavior of vanishing masses that have completely lost their mass, which I believe to be the identity of dark matter, is interesting. Its proper time has stopped, and its volume, inertial mass, and gravitational mass in three-dimensional space are also zero. Therefore, it travels at the speed of light and usually passes through matter without colliding with it. It is also unaffected by the gravitational field. However, it only has the effect of distorting space and creating a gravitational field.

Reference link → Detailed examination of the behavior of dark matter

I try to prove the existence of such an object by a thought experiment. These proofs are possible within the realm of classical physics (mainly relativity).

2. Proof of existence of dark matter

The main theme here is to prove that matter without mass (dark matter) exists. In particular, we clarify that the property of mass energy and the ability to create a gravitational field are different things.

When multiple objects release binding energy -Ef by binding with gravity, electromagnetic force, nuclear force, etc., the mass (ΔM=Ef/c^2) corresponding to the binding energy Ef disappears from the total of the original masses. is a well-known fact and there is no room for doubt.

In order to expand the interpretation of this well-known phenomenon and to verify the results, we will tackle the following themes (1) to (3). Thereby, the above object is achieved.

Assuming a state in which the bond energy is extremely high in the bonding of multiple objects, it is easy to assume that the mass will disappear from the substance. Note that the term "bonding" is not limited to complete coalescence, but also refers to a state in which a bonding force acts in close proximity.

Even if matter releases binding energy and becomes zero mass and volume, matter continues to exist in four-dimensional space-time. It's just that the volume and mass in three-dimensional space are zero because the time axis has grown infinitely.

Mass is equivalent to energy and can be completely removed from matter, but the property of creating a gravitational field is in matter itself and is immutable and inseparable. This property is called gravitational elementary weight here. I think that the invariants of the universe include mass energy, electric charge, and gravitational weight.

2-1. Proof of existence of dark matter

In the conventional definition, the gravitational field has also been regarded as a mass energy, momentum tensor. However, here it was necessary to treat "the property of receiving acceleration by inertial force and gravity field" and "the property of creating a gravitational field" as separate things. Therefore, they are divided into two elements, "mass energy" and "true mass".

A gravitational field is the distortion imposed on space-time by the "true mass". Therefore, objects passing through it move according to the distorted space. In other words, it is not a force that simply acts between objects like nuclear force or electromagnetic force.

The ability to distort space and create gravitational fields is not associated with inertial mass, energy, or momentum, but rather as an independent property and associated with matter. The term "true mass" is used here to express this property. 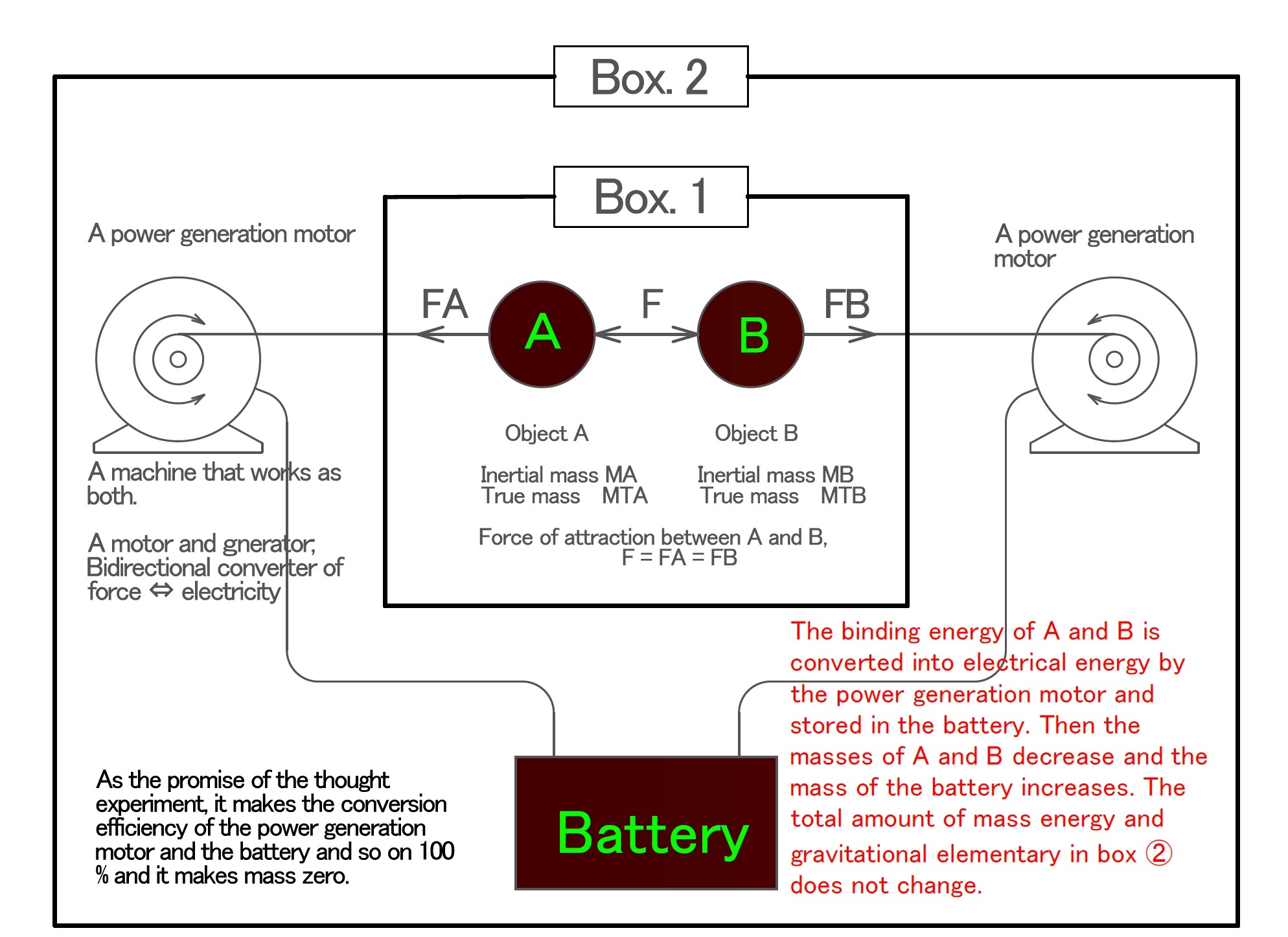 ←  Return to the top page